When it comes to paid survey sites, normally the site you sign up for is the one that administers and pays you for each survey (or activity) you complete.

Though, Survey Voices is a bit different. You don’t actually take any surveys on their website at all. Additionally, as you don’t take surveys on their site and they don’t pay you, you don’t even really create an account. More or less, you just provide your email and other contact info.

You’re probably thinking, “okay so what do they even do?” Well in this review, we’ll answer that question and let you know if using Survey Voices is worth the time.

What is Survey Voices?

By this point you’ve probably realized that Survey Voices is not a typical survey site. They are what’s called a survey site aggregator. Basically how they work is as link between you and other survey sites.

So rather than you finding each of the survey sites that they recommend on your own, they record your info and give you the top survey site opportunities (or at least that ones that they think are the best).

Their goal is to communicate to you the survey sites that they think you should sign up for.

The company behind Survey Voices is Reward Zone USA, LLC, which appears to be based out of New York and has a president named Matthew Conlin.

How Does Survey Voices Work?

First, you’ll be prompted to enter your email.

From there you’ll be asked to enter your first name, last name and zip code. After that, you’ll enter your address and phone number. Now that appears to complete the first survey that collects your basic information. You’ll then be asked to take a second survey.

The survey that commences is about 15 questions long and are taken one at a time. It’s goes by pretty fast. They ask basic demographic information and the questions cover the following:

After you finish up that second part of welcome process, you’ll then be asked if you are interested in making more money on the side. Here’s where it gets interesting. If you click on “yes”, as most people would, a new tab opens. In that new tab, it goes to the sign up form on another survey site. This is where they act as a survey site aggregator. They open a new tab with a survey site that they think you should join.

If you sign up for that site, or just close out the tab, you’ll return to the Survey Voices page where you had clicked “yes” to making money.

However, the question has changed. The question now asks if you’d like to earn from home. If you click “yes” the process I just described repeats itself. A new tab opens holding a survey site that Survey Voices wants you to join.

Upon closing that tab and going back the original Survey Voices tab, you’ll be informed that you’ve completed your initial set up and that Survey Voices is loading a list of survey sites for you.

Soon after, a page loads (on Survey Voices’ website) that shows a list of survey sites they recommend. Many of the most popular survey sites are on this list.

From there, you may receive emails and possibly other communication from Survey Voices letting you know about other survey sites.

Survey Voices isn’t offering you ways to earn on their site.

Though they do offer you ways to earn, by signing up for other survey sites. If you sign up for the survey sites they list and complete surveys and other tasks on those sites, you can get paid by those respective sites.

What Are the Payment Options?

Much like the above answer, Survey Voices doesn’t have any payment options. They don’t pay you for anything.

If you sign up for the survey sites they recommend, like Swagbucks for example, you would then begin using Swagbucks to accumulate earnings. Once you’ve reached enough to cash out, you would choose from Swagbucks’ payment options.

You aren’t choosing payment options from Survey Voices, as you aren’t earning with them.

There are no Survey Voices coupons or deals as they are just middlemen. You go to them, and they direct you to another survey site.

One of those survey sites could be a decent opportunity and turn out to be a deal, but it wasn’t a direct deal offered by Survey Voices.

Many other Survey Voices reviews online express their confusion with the survey site’s model. As it is just a middleman to get to other survey sites, some review questioned the legitimacy of the recommended sites.

Other reviews stated that after giving Survey Voices their phone number and email, they were spammed constantly. One reviewer said that they believe Survey Voices sells the information of those who sign up to other companies that in turn, solicit those members.

How Does It Compare?

It’s difficult to compare Survey Voices to other survey sites as it’s truly a paid survey site aggregator, not a survey site.

Whereas other sites pay members to take surveys, Survey Voices just points users to the survey sites they think just be joined.

There are two things I think can be compared, however. First off, Survey Voices has a clean and easy to understand website design. It feels legitimate based off of the way it was designed. That doesn’t necessarily mean it’s legit though.

Additionally, respect to member’s private information is a key indicator of a quality survey site. Many of the top survey sites (like Ipsos i-Say and MySurvey) have a respectable privacy policy, though, how Survey Voices uses member’s information is unclear.

Though, we cannot say this as a fact. The two issues that brought us to identify this privacy concern is (1) other reviews stated they were spammed after giving Survey Voices their information and (2) Survey Voices asks for a decent amount of specific information (income, debt, credit rating, assets, etc.) and it doesn’t seem to be clear as to why they need that information. Leading on that point, it’s not unusual for a survey site to ask that type of information, but as Survey Voices is an aggregator, we don’t see how that information directly correlates with finding the best survey opportunities for an individual.

Why does Survey Voices ask the initial survey questions?

Per their website, Survey Voices asks those questions in order to match you up with the most interesting types of survey sites and advertisement to you.

How do I get paid?

As Survey Voices is just the aggregator, payment is provided through the third party survey site you signed up for. Survey Voices’ website refers users to this page to find the contact info for the site they’d like to communicate with.

How can I get Survey Voices to delete all of my personal information?

Per user request, Survey Voices states on their site that they will remove the user from the program. Here’s the link to unsubscribe. The site does note that if they’ve already shared your info with a third party, you have to contact them as well to get removed.

Is Survey Voices Legit or a Scam?

With all the negative reviews online, it seems instinctual to call Survey Voices a scam. Though, there’s a few things worth noting.

As to the confusion if this is a survey site or not, Survey Voices does clearly state on their homepage that they are an aggregator. They also explain what that means and describe how their site works.

So in regards to that, Survey Voices cannot be claimed to be a scam.

Another point Survey Voices has in their favor is that their parent company, Reward Zone USA, LLC, received an “A” rating on the Better Business Bureau website.

Though where it gets messy is the spam calls and emails members receive and the concern of Survey Voices selling member information to solicitors. It does seem like they do, at least from their FAQs page.

Though, with all that said, we can’t outright say that Survey Voices is a scam. We do however, have concerns about their privacy policy and their respect for user information.

Is Survey Voices Worth It?

If you’re looking to make cash now, Survey Voices is not the place to start at.

Although they try to get users to sign up for some decent sites, they also include a few survey sites that don’t seem legit.

In all, we’d recommend finding a survey site you are really interested in, learning about its benefits and trying it out, rather than letting Survey Voices decide all that for you. 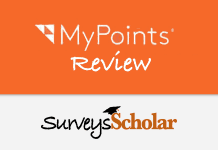 MyPoints Review – They Offer Many Ways to Earn but Is It Legit? 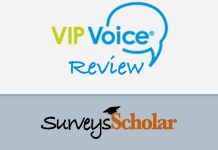 VIP Voice Review – Are the Rewards Legit or a Scam?

ABOUT US
The goal at SurveysScholar is to separate the legit paid survey sites from the scams. Although we may receive compensation from some of the sites we link to, the opinions expressed on this site are our own. We strive to find and communicate the very best ways to make money online.
FOLLOW US
© 2020 SurveysScholar.com. All rights reserved.